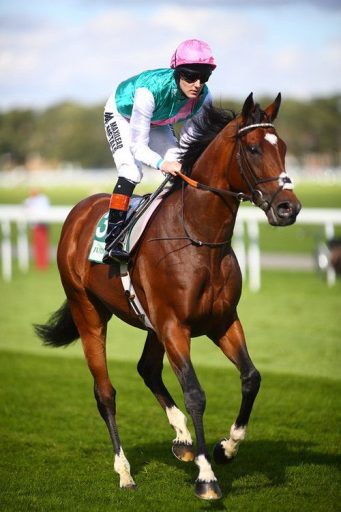 Will go on any ground, one of his stand out performances was 3rd in the Wokingham on fast ground over this C&D off 108 back in the day but also won the Stewards Cup at Goodwood off 104 on soft ground 2 years ago, so no worries if the ground stays in the fast side or whether more rain gets into the ground. His last race was pleasing and looked a little unlucky not to be closer than he was because of traffic problems and picking an in running injury, so that performance certainly needs marking up, that was on the AW where he has a tough mark of 107, his mark on the turf is just 99 and while stats point out his better on the AW but realistically he races in much more competitive races when tried on the turf and his form on both surfaces are a lot closer than a glance reveals. Not only does this look the weakest race his competed in for a long while but also faces it on his lowest mark for 5 years. There is a couple of negatives this is his first run back from the previous mentioned injury, but if fit he has a excellent record when running fresh with 3 wins to his name and a further 2 runner up spots so a good time to catch him in fairness and the other negative is jockey Hayley Turner, I’m not the biggest fan of hers but she does seem to do well at the Shergar Cup and has a positive level stake profit at Ascot from the last 5 years, plus trainer Dean Ivory won this race in 2017 and is excellent current form.

Absolutely friendless in the market which doesn’t inspire confidence but he certainly interests me no less, an ex French colt that impressed when winning on British debut for Mark Johnston on fast ground in a Carlisle maiden, he had a lot more in hand than the bare result states after idling when comfortably having the race in the bag, he was snapped up at the tatts straight after and his mark of 83 looks very exploitable on that winning piece of form, he moved to Ian Williams after the sale and was applied with cheek pieces which looked a good move to keep up his concentration but was given the usual Jamie Spencer treatment and was ridden far too cold which clearly didn’t suit and had to come widest to mount a challenge which also was against, that effort can have a line through it for me and a better positive ride will see him in much better light. Ian Williams is good current form and books the controversial Australian jockey Jamie Kah who has a fantastic record down under and hopefully one we’ll see more of in the future.

Made a pleasing winning debut on turf after starting her career on the AW, she had in running troubles, caught in a pocket and wanted go a little quicker than the wall in front travelled seen her pull a little bit and when mounting her challenge the at the time leader crossed her path which forced her switch her path a couple of times but she still got up with a strong powerful finish certainly with more to give, that was her first try at a mile and looks like further in time will suit even more too. This is a big step up in class but looks capable of building on that and very unexposed with just her 2nd run on turf and first on soft ground which on breeding could be a big positive with her sire Nathaniel whose made a very promising start to his stud career with the likes of superstar Enable, Nathaniel himself was a double Group 1 winner that excelled on soft ground and was even half a length behind Frankel on debut on soft ground and again wasn’t far behind the legend on soft in the Champion Stakes.