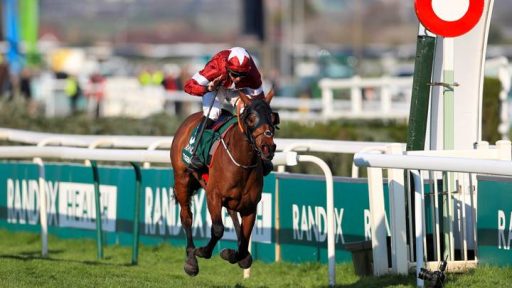 Irish Trainer Gordon Elliott has revealed that his horse Tiger Roll worked very well on his recent racecourse gallop at Leopardstown, which suggests the 5/1 favourite for the steeplechase at Aintree is back to his best ahead of that race.

Tiger Roll has featured just once so far on the track this season and that was in the Boyne Hurdle where he came home fifth of the nine runners at Navan after going off at 9/1.

The 10-year-old’s next assignment is the Cross Country Chase at the Cheltenham Festival. He has Cheltenham odds of evens for that unique contest where the runners are required to jump all kinds of different obstacles in the middle of the course.

Tiger Roll has won the Cross Country in each of the last two years. His experience around the course is why he is one of the leading Cheltenham bets tips for the race this year on his hat-trick attempt. If successful, it will be the fourth time he has won at the meeting as he also prevailed in the 2014 Triumph Hurdle.

History on the cards at Aintree

There have been various points this season where a bid for a third Grand National win has been in serious doubt. Despite that uncertainty, Tiger Roll has topped the betting to win the 2020 event ever since he crossed the line in front last April in Liverpool.

Once his connections confirmed their horse would run if he was fit and healthy, his odds shortened for the 4m2½f contest.

Tiger Roll was handed 11st-10lb by the handicapper at the weights launch for the race last month. He will need to carry top weight, 2lb more than his closest rival on that list, Bristol De Mai, who is 20/1 for success.

No horse in history has won the Grand National three years running. Tiger Roll became the first back-to-back winner in 45 years to defend his crown in 2019 when he justified going off as the 4/1 favourite. Given how much he enjoys the bigger fences, a third success cannot be ruled out.

Elliott has 15 entries in the field

Elliott has had a fantastic season so far and is vying for the Irish Jump Trainer Championship. He currently trails Willie Mullins in the standings but there is very little between the two men. The dual Grand National-winning trainer is second best in the betting to win that trophy.

Although that championship will be on Elliott’s mind, the Grand National is likely to be his main priority. He has 15 horses entered for the race. It is very unlikely that they all will make it into the final 40-runner field but he is sure to have the most horses by any trainer.

His second-best chance this year is likely to be Alpha Des Obeaux who is 25/1 with the bookmakers. He fell in the race in April two years ago but has finished the Grand National course since then, finishing third in the 2019 Becher Handicap Chase.

If he is able to prevail in the latest renewal of the world’s most famous steeplechase, Elliott will be just one win away from the joint record of wins by a trainer.