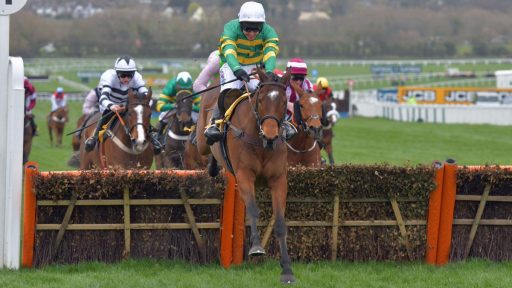 Racing goes behind closed doors at Wetherby on Tuesday and a spokesperson for the course has stated that only one trainer/representative, one other member of staff and no more than two owners per horse will be allowed into the course, as of the instructions of the UK Government.

There are seven races on the card though the field sizes are limited slightly and you may be better at looking for football betting tips today. The opening race is a handicap hurdle for conditional jockeys’ being run over the minimum 2m. Twelve-year old Flanagan’s Field was a winner just under a fortnight ago and though up 6lb and against some less exposed younger rivals I’d be surprised if he doesn’t go in again ahead of the top-weight Hello Bob in a weak opener.

There are two fancied runners in the novice hurdle (2.35pm) from successful yards. Fergal O’Brien and Jonjo O’Neill both boast 20% strike-rates when visiting this course and it’s the former’s representative, Global Fame, who should take all the beating on the back of a good second behind future grade 2 winner Harry Senior. Couer Serein should chase him home and I can see Eagle De Guye filling the places, providing all eight run, with him being a half-brother to Friday’s Gold Cup winner Al Boum Photo.

Lady Master (3.10pm) is currently unbeaten over this trip and did win over C&D in the winter last season. He’s now racing off a 19lb higher mark but is still capable off this rating after tiring over a longer trip last time at Market Rasen. The other five in the field are relatively well-handicapped with the exception of Roxboro Road but it’s that horse who might be the one to back here on his second start for Ben Haslam. He went off 3/1 on stable debut in a higher grade at Ayr and despite being pulled-up that race was a lot stronger and the winner has subsequently gone down by half-a-length in a class 2 at Kempton.

Gennady had been in good form prior to moving stables but finished last of nine for his new yard recently and might be best watched for now it would be difficult for me to tip this horse. I think Present Of Dubai is a favourite worth taking on as connections reach for the headgear after failing to settle last time out so the two that catch my eye are Bobndave for Sue Smith who if ready to go after a 228-day break would have a chance as he was in good form before his break. The other is four-year old Half Bolly on handicap debut. He was pulled-up on return to action but that was on bottomless ground and his run prior to that came in a C&D listed event where he finished midfield. He’s won a juvenile hurdle as well as this season and he looks a nice price in a trappy looking contest.

It’s a three-way match-up in the Novice Chase (4.20pm) and though it’ll more than likely become a tactical race it should well be a good contest with only 3lb separating the three runners on official ratings. Coole Hall has been the bridesmaid the last three outings whilst Bobo Mac has filled the same spot twice in his last three runs, neither have won over this 3m journey though. The latter has to carry a penalty in this and that should open the door for Commodore Barry who has already gained three distance wins, once on soft ground and he hails from the in-form Kim Bailey yard.

It may well be a quickfire double for Kim Bailey as he saddles a fancied runner in the class 5 handicap hurdle (4.55pm), Pond Road, who shaped as though the step up to this longer trip would suit the last day. Espoir Moriviere should appreciate the drop back in trip whilst Skylanna Breeze could offer more in first-time cheekpieces but one at a bigger price who could be the answer is the seven-year old Incertaine who is just 2lb above the mark she won off just three starts ago. She needs to put her last two runs behind her but Brian Hughes, who won on her at Market Rasen, is on board again.

The concluding NH Flat race (5.25pm) should go to the way of the favourite Glencassley as that gelding finished a respectable fifth in a hot Newbury bumper behind eventual Champion Bumper sixth Ocean Wind. Aidan Coleman travels for just the one ride for Charlie Longsdon who has a 33% strike-rate at the course with his bumper horses. The unraced No Anxiety has a nice pedigree and looks the main danger to the favourite.