The Best Of the Betfair Chase card 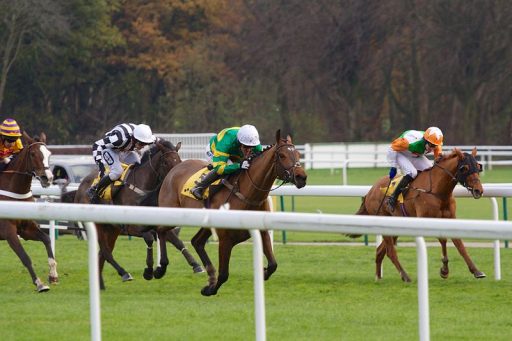 The Best Of the Betfair Chase card

Not the strongest of looking Listed Novices Hurdles at Haydock, but Grand Sancy started off Paul Nicholls across the card double well in the end. Cause Toujours was the gamble of the race, he started the day around 5/1 and backed into 15/8 before easing out to 9/4 dictated the pace, he travelled the best of the field and was slickest over his hurdles, it was clear why he was so well supported, he looked to have the eventual winning fav Grand Sancy in his pocket when 4 lengths ahead when jumping the last hurdle, but he quickly emptied on the run in and Grand Sancy who was a bit too keen throughout his race still came past very strongly and effortlessly to win by 2 lengths and they was well clear of the rest of the field. He’s now 3 from 4 this season and since his wind op and looks capable of bagging himself a couple of nice prizes especially over further if getting him to settle. Trainer Paul Nicholls said “He’s not going to win the Supreme but he’s a good, fun horse who will make a chaser next season”

The Grade 3 Stayers Handicap Hurdle seen trainer Emma Lavelle pick up her biggest prize winner in her career when Paisley Park won a thrilling finish. Ian Williams was sitting on 2 winners for the day and had the red hot fav First Assignment who many thought he was Ian Williams banker and was being bet that way. But Paisley Park had other ideas and showed excellent stamina when although still in touch before the last fence, he looked well held and wasn’t helped by a crashing fall just next to him, but the top weight who was giving away 12lbs to the fav quickly powered home to pass First Assignment and Shades Of Midnight on the run in. The Grade 1 Long Walk Hurdle has been mentioned as their next target and while he’d have to find more again to be in the mix, there’s no reason the progressive gelding won’t be well fancied.

The big race of the day and first Grade 1 of the season was a joy to watch 5 of the country’s best chase stayers and was a pleasure to see Bristol De Mai win and prove many, including myself wrong and win this race for a 2nd year running. Trainer Nigel Twiston-Davies who isn’t having the best of times recently, showed a terrific training performance to have BDM in peak condition and prove him to one of the best when at the top of his game. BDM wasn’t exactly foot perfect neither did he win as well as last year, but he dictated at a solid pace and even thou he was headed for very short periods of the race, he was remained very calm and quickly got his head back in front. Native River impressed in 2nd, for me he jumped better than BDM but didn’t have BDM cruising speed nor tank but will surely come on for the run and enjoy stiffer tests throughout the season. The horse to take from the race thou, was Thistlecrack, a return from 11 months off and just his 3rd run in 22 months after a tendon injury, he showed tons of speed and showed what a engine he still has, his jumping had to watched with squinting eyes for most of the race and ran through snatches, but to still finish under 6 lengths off the winner was a credit to him confirmed he still has it in him to add more Grade 1’s to his name.