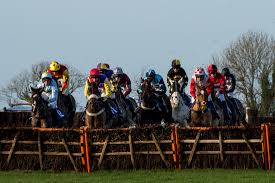 Won well on his first start for connections 3 runs back in a 0-110 novice race, he was raised 10lbs for his troubles but ran two fine races in tougher races, the last in a 0-130 at Haydock where he looked to be claiming his 2nd win over hurdles when jumping the last in command, but unfortunately he looked a little tired in the end over the soft underfoot conditions and was tamely beat by over 3 lengths. Today he returns to a much easier 0-125 and the sounder surface is a big plus.

The most confident selection of the 4, the ex French gelding cost 125k euros, he’s been highly tried in both his 2 starts for Colin Tizzard, the first when racing too keen but still a great run finishing 3rd to a good class 2 field. He again impressed visually NTO at Cheltenham, although soundly beaten by Al Dancer who is potentially Grade 1 class, he still finished a good 4th and was just a length behind Not That Fuisse who won a 0-140 NTO at Taunton. Highest Sun today, drops into a much easier race, handily is eased a lb by the handicapper and inform jockey Harry Cobden takes back over the reigns.

Inform trainer Christian Williams sends just the one to Wincanton which is C&D winner Potters Corner, he won on just his 3rd start for his new connections and is now rated 127, in the past over hurdles he’s won off a mark of 130 so looks well in and still unexposed over fences. His latest win also showed signs of more to come and with no pace in the is race, it’ll suit and will likely try to make all again.

This gelding was rated 97 earlier in the year, granted for star trainer John Gosden, he was then very poor in 5 runs for his new trainer Roger Fell and quickly dropped to a mark of 77, then returned to form and ran a huge race at this course over 2 furlongs shorter, while I’m not 100 percent convinced this 1m4f trip is his best, but while looking very well handicapped and weighted to reverse the form with odds on shot Elysees Palace his definitely worth the risk.b