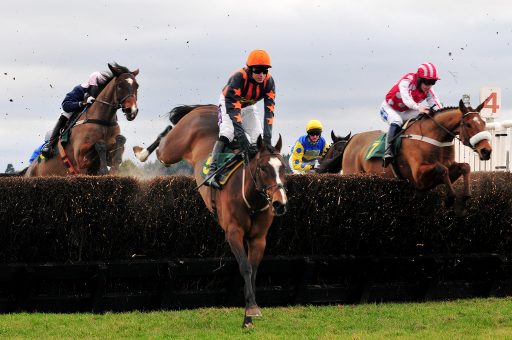 She’s looked a top class mare over fences this season recording a perfect 4 straight wins, her form too has been boosted regularly, her first win when beating Grade 2 winning Lostintranslation who was also 2nd in the Cheltenham JLT gives LBAR form a nice look, she then went on to win a Grade 2 easily herself again beating Talkischeap and Lostintranslation back in 3rd before again stepping up and winning her first novice grade 1 in the Kauto Star on boxing day where she beat Cheltenham festival RSA winner Topofthegame and runner up Santini to further boost her strong form already. On her last outing she further impressed showing her versatility on fast ground over at Leopardstown making all and while looking in trouble from the smooth travelling Kaiser Black who won well NTO, LBAR further pulled out more, pinged the last won well running strongly through the line. She missed Cheltenham for this and so will be fit and ready, Richard Johnson whose been on her last 4 wins is back in the saddle and the mare loves flat tracks.

Band Of Outlaws will be popular in this after his success at Cheltenham in the juvenile handicap winning well off a big weight, this will be a tougher against higher class opponents like stablemate Fakir D’oudairies who ran a huge 4th in a deep Supreme at Cheltenham where 4yo’s have a historic tough time in that race. But the biggest threat and the star quality of the race comes from Cheltenham Triumph easy winner Pentland Hills, he had plenty go wrong in the early stages of the race, nearly lost his jockey at the first, was bumped a couple of times losing several lengths under both circumstances, the race looked wide open entering the straight with a bunched herd with Pentland sitting in behind with not much room, but he powered his way through on the bridle and jumped the last in command and a couple of hits of the whip pulled away well from his nearest rival with the rest of the field well strung out to give Nicky Henderson his 7th win in the race. Pentland looked to have plenty left in the tank and wasn’t given that hard of a ride and should be on song for this.

Kemboy has progressed quickly the last 2 seasons over fences but still a risky jumper and not one you want to be at short prices, especially at a track like Aintree where the fences are tough, he unseated rider at Cheltenham in the Gold Cup when last seen, which wasn’t all his fault but does point out his quirks over fences. Road To Respect is prone to errors himself but handles them better, he was over 7 lengths behind Kemboy in the Savills Chase at Leopardstown, but did have excuses with regularly being cut up from Coney Island and he even stumbled badly coming around the final bend losing ground but ran a huge race in 3rd considering. He improved in the Irish Gold Cup and was arguably an unlucky close 2nd after plenty of little mistakes costing him his 4th Grade 1 success, he missed the Cheltenham Gold Cup to run in the Ryanair instead, the lack of pace not suiting and losing a shoe in running was against but still ran a big race in 3rd, running a near mile less than opponents Clan Des Obeaux, Bristol De Mai & Elegant Escape at the festival, he should be less tired and this step up to 3 miles on a flat track are positives.