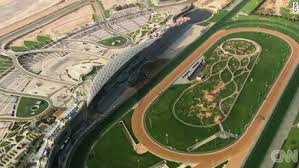 Trainer Doug Watson claimed back to back victories of this race in 2016 and 17 and on his hattrick bid with Muntazah last year he bumped into a Hamdan Mohammed Al Maktoum owned Heavy Metal who won this impressively for his new yard. Heavy Metal reappeared well below form this season, but after losing a plate, vet saying he was lame and race not run to suit, he had obvious excuses, but while running better in 2 races since, he still hasn’t showed anywhere near the kind of form he came into this race the year before, even with a change of yards again haven’t sparked enough improvement, although he broke records last year of being the oldest winner of this race, this looks a further bridge too far to win at the age of 9 and at his odds, he’s a huge lay and even worth laying the place too IMO.

Previous mentioned runner up in this race last year Muntazah has visually looked the quality of the race this year, he took a little while to get warmed up but produced back to back career best displays to win 2 Group 3’s over C&D ahead of many in this line up. Yes! he still has scope to improve again, not that he needs to, and he does look the likely winner, but he’s certainly not bomb proof and his odds are very poor and to be taken on.

COAL FRONT is the unknown quantity of the race, trained by top American trainer Todd Pletcher who doesn’t travel to Dubai often, he brings over 2, Audible for the World Cup and Coal Front in this, he’s still unexposed with just 8 runs to his name, winning 6 and just the 1 run at a mile where he beat a strong Group 3 handicap field off top weight, he made the best of a bad draw like he deals with in this and pinged the start and claimed a sit good sit at the front of the pack and shared the strong pace with All Out Blitzed who felt the pinch in the straight but Coal Front impressively was strong in the finish, the form is working out well with 4 in behind winning NTO, with more scope not only does he look the biggest threat Mutazah, he looks a potential star on the dirt and has the most exciting future.

True Timber is another American, he’s a lot more exposed but is improving, he ran a fine 2nd in the Cigar Mile Handicap before tackling the Pegasus World Cup where he firmly looked out of place, while this will be easier, he should find a couple too good IMO.

Another Doug Watson chance comes from Kimbear and is a little bit tricky to get right, certainly has ability and plenty of speed, his prep hasn’t gone all too well but did finish in front of Muntazah on his penultimate run with sustaining a injury in the process, Muntazah has improved since thou while Kimbear didn’t flatter NTO, no surprise to see him win but even on a nice each way price, I couldn’t back him.

One more that needs a mention is NONKONO YUME, not the most consistent recently, but around this time last year he beat Japans best mile horse Gold Dream to win the February Stakes, Gold Dream has since got his revenge, but if Nonkono runs anything like he did in that race, he could be the surprise of the race.

Melbourne Cup winner Cross Counter comes in as the short priced fav, when winning the prestigious Melbourne Cup he was on a good mark and crept in on bottom weight, he’s not exactly bred for staying trips and was his first attempt at 2 miles but handled it well, jockey Kerrin McEvoy used his whip 4 more times than permitted to add and this will be a different proposition off level weights and hasn’t raced for 144 days which isn’t convenient even if trainer Charlie Appleby is fantastic at having them ready. For sure the best horse in the race and the likely winner, but at the price and for the negatives listed, I’d be against.

Stablemate ISPOLINI the biggest threat, we know his fit and we know he loves Meydan, he impressed on his seasonal debut after a long lay off to run on well over 1 mile 4 furlongs, he improved well when winning NTO upped in trip which certainly helped and on the back of that he raced in the Group 3 Nad Al Sheba where again improved and obliterated a decent field, he was mentioned at going for the Sydney Cup next month but running in this instead also point to signs connections aren’t 100% convinced Cross Counter is their best chance. He steps up in trip again here which looks like it’ll bring more improvement and has been given a better draw than his rival too.

Son of Frankel Call the Wind could be dangerous, he’s a Group 1 winner in France when winning the 2m4f Qatar Prix du Cadran, his brothers With You and We Are were both Group 1 winners in France over much shorter trips, while already proving his stamina, it was a weak race he won and could find this much tougher, plus is yet to go left handed, but he shaped well LTO over a sharp mile and should be ready to run a big race here.

PRINCE OF ARRAN warrants respect and is the each way play of the race, he finished over 5 lengths away from Vazirabad in this race last year and has improved since, he won the Nexus Stakes at Flemington so he could just get into the Melbourne Cup where he ran a huge race in 3rd after a unsuitable quick 3 day turnaround, that needs marking up, he was just 3 lengths away from Cross Counter and is 3lb better off in this race, while Cross Counter has more scope to improvement, that form is interesting and Arran has race fitness on his side when he ran a big race over a sharp 1m 4f earlier in the month.

Platinum Warrior is the unknown chance, he won a Group 3 in Ireland and was switched to American Shores where his improved to win the Group 2 San Marcos over 1m2f, interestingly both wins under Shane Foley and travelling a long way to try this 2 mile trip for the first time again with Shane back onboard, not exactly bred for 2 miles on his dams side but son of Galileo must have some stamina and like previous mentioned a long way to come if connections aren’t sure he’ll stay.